I always knew John Fogerty was a problem. He was so different from his brother Tom. This is a well done piece with many quotes and stories from the bass player. 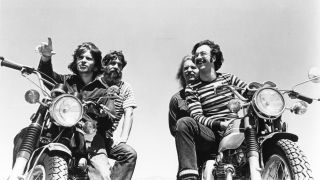 In 1995 Clifford and Cook set up Creedence Clearwater Revisited, initially with The Cars’ Elliot Easton on guitar. But Fogerty issued an injunction over the name, and for a while they went out as Stu Cook and Doug ‘Cosmo’ Clifford Present Cosmo’s Factory – An Evening With Creedence.”You could scarcely fit it on a ticket,” says Cook.”John maintained that the trademark could only be controlled by unanimous decision. We said it was a majority, and the court saw it that way. In the end we settled for money, which didn’t seem to be about saving the name or preserving the honour of his creations.”They could in fact use the name Creedcence Clearwater Revival if they wished, but “we chose not to out of respect for the original band and to avoid unnecessary confusion with our fans,” Cook says. Fogerty has preserved the honour of his creations mainly by not playing them. He claimed he was prevented from doing so, although that didn’t seem to prevent anyone else from playing them. When he finally played a bunch of Creedence songs at a benefit show for Vietnam veterans in 1987 it was a newsworthy event.